Before considering the most appropriate package that best suits your 2019 F1 British Grand Prix needs, it is important to consider the location and benefits of the available grandstand and general walkabout tickets. We suggest that you refer to the attached grandstand map, to further assist you in making the best possible choice.

The Silverstone circuit currently has a capacity of 90,000 F1 spectators for general walkabout admission and 60,000 grandstand and enclosure seats. You have a choice between a Gold grandstand seat, a Silver enclosure seat (Bridge or Farm), two Bronze Plus terraces (Copse and Luffield) or a bronze general walkabout admission ticket, giving you access to the various raised viewing areas (mounds) located around the outside of the Grand Prix circuit.

All grandstands seats are numbered but only 12 grandstands (Pits Straight B, Copse A, B, C, D & E, Becketts Outside, Luffield A, B & C and Woodcote A & B) are covered. There are sufficient toilets and catering facilities all around the track. There is ample opportunity to buy merchandise, with a number of stalls inside the circuit, and a few unofficial ones on the outside.

The Pits Straight grandstands are located on the pits straight directly opposite the pit area, which means it presents you with a view of the racing teams and their pit activities. It also means that you will see the start/finish of the race, from the green light to the chequered flag, as well as have a clear view of the podium ceremony. Two bigscreen TV’s are also located here, enabling you to follow the entire race and not loose track of the procedures.

The five Copse covered and very popular grandstands are situated at the end of the pits straight, all the way around the outside of Copse corner, a very fast 265km/h 5th gear right-hander. Copse corner is not only fast but also a difficult corner for the racing drivers, because at the corner entry they cannot see the corner apex and the exit is off camber as well. The five grandstands also present you with a good overall view of the main straight and a distant start-finish line, as well as the straight down to Maggotts corner.
A bigscreen located opposite the Copse Hospitality Paddock is visible from some of these stands but rather distant.

The Becketts covered grandstand is situated on the outside of Becketts Corner, which forms part of a complex of corners, which is probably the most demanding and technical set of turns of any Grand Prix circuit in the world, known as the Maggotts – Becketts – Chapel complex. For the first section, Maggotts, the track flicks fast left, followed by a fast right, and is taken nearly flatout. For the second section, Becketts, the track once again flicks to the left and then to the right, but this section is taken at a slower speed of about 210km/h and requires a change down of two gears. The complex ends with a fast slight left-hand kink, the Chapel corner, which is once again taken flat at about 235km/h in 5th gear. What makes this complex even more challenging is the fact that it allows various ideal lines to be used by the racing drivers. The total complex of corners is visible from this grandstand.
The grandstand also features a bigscreen TV, which for obvious reasons makes your entire Grand Prix so much more enjoyable. A great grandstand but be prepared for a long walk.

The uncovered Hanger grandstand is located at the end of the Hanger straight, the fastest section of the track, where the cars reach speeds of up to 310km/h in 6th gear. From this stand you can see the cars coming down the Hanger straight and brake down hard to about 180km/h in order to negotiate the Stowe corner. You can also follow the racing cars through the Stowe corner.
A bigscreen TV located next to the Stowe C stand, is visible from this stand which makes it so much easier for you to keep track of what is happening later on during the race.

Stowe Grandstands A, B & C

The 3 uncovered Stowe grandstands are located on the outside of the Stowe corner, a 190km/h 3rd gear right-hander. For this corner the drivers want to avoid understeer at all costs as it will badly affect their overall lap time. From Stowe the track drops away into the short Vale straight.
A bigscreen TV located next to the Stowe C stand, which is visible from all 3 these stands, enables you to follow the entire race and not loose track of the procedures.

The uncovered Club grandstand is located on the outside of the Club corner, which immediately leads into Club corner. Vale corner, a 90km/h 2nd gear left-hander, is the slowest corner on the circuit, and is followed by the sweeping but difficult 130km/h 3rd gear right-hander, Club corner. Acceleration out of this corner is both critical and tricky, because with all the acceleration power being applied, the cars tend to go into oversteer very quickly. This grandstand offers you a good view of the racing cars as the come down the Vale straight, through Vale and Club corners and down the Abbey straight.
A bigscreen TV located opposite the Vale hospitality stand is visible from this stand, although fairly distant.

The uncovered Abbey grandstand is located on Abbey corner, which is a left, right “chicane” offering good overtaking possibilities. For the first part of the Abbey chicane, the cars brake down hard from around 295km/h to just under 125 m/h in 2nd gear. The second right-handed part is taken under steady acceleration, apexing at around 190km/h in 3rd gear. Abbey used to be a flat-out left-hand bend, but the chicane was put in to slow cars down in the aftermath of Pedro Lamy’s enormous crash in 1994. From this stand you can see the cars coming down the Abbey straight, through Abbey corner, and all the way up to where they disappear over the hill into Bridge corner.
The action and excitement of the whole race can be followed on the bigscreen positioned directly opposite this grandstand.

Both the Farm and the Bridge enclosures are uncovered and but offer really good value for money viewing, are well priced and are therefore very popular. They are also unfortunately usually one of the first grandstands to sell out. The Farm enclosure is located at the entry of the Farm corner, which is more of a flick to the right and is taken flat under acceleration. The Bridge enclosure is located on the outside of the Bridge corner entry, which in Jenson Button’s view, is one of the most challenging corners on any Grand Prix circuit. During qualifying the drivers will definitely take this corner flat, at around 265km/h in 5th gear. Bridge is the best of the two enclosures, offering a view of the cars around Bridge as well as Luffield corners.
A bigscreens opposite both enclosures intensifies the drama and magnifies the action on other parts of the circuit.

Luffield Grandstands A B & C

The covered and newly renovated Luffield grandstands are located along the outside of mainly the exit area of the right-handed hairpin Luffield, a 105km/h 2nd gear and fairly long hairpin. The exit of this hairpin is both difficult and important as the racing drivers need to get onto the power smoothly and fight the inevitable understeer, to ensure good speed onto the pits straight. These grandstands offer superb viewing of the cars from right Bridge corner all the way around the stadium section, the pit entrance, around Luffield, up to Woodcote corner.
These grandstands also features a bigscreen TV, which for obvious reasons makes your entire Grand Prix so much more enjoyable.

Woodcote Grandstands A & B

The two covered Woodcote grandstands are located on the outside of the last corner on the circuit, a sweeping right-hander, called Woodcote corner. The cars negotiate this corner around 270km/h in 5th gear under full acceleration in order to obtain the best possible top speed down the pits straight. These two stands offer you distant views of the racing cars coming through the stadium, close up of the cars through Woodcote corner all the way down the pits straight, as well as a distant view of the start/finish line.
The bigscreen opposite the pits straight grandstand is visible, from these 2 stands, although rather distant.

The general walkabout areas (general admission areas), with a capacity of 90 000 spectators, provide for excellent viewing and offer great value for money admission. You can choose to view from any of the many raised viewing areas (mounds), located around the outside of the track. The areas bring you really close to the action, and also provide easy viewing access to disabled spectators. But as always there are no numbered seats and you must be there early to get a good spot, which you stand to loose should you have to visit a toilet or leave to buy food. Don’t forget to bring along some fold-up chairs.

In terms for good photographic opportunities, the best British F1 grandstand is probably Club, where the cars slow down substantially and pass very close to the grandstand area. The same goes for the Luffield A, AA and B grandstands as well as the Luffield Terrace. For obvious reasons the Pits Straight A and B will provide you with numerous good pits and start line scenes, but cars roaring down the pits Straight at nearly 300km/h, makes good photographic shots more problematic. Fortunately all weekend grandstand tickets (excluding Bronze tickets) will give you free access to all the grandstands for both Friday and Saturday, which will provide you with an excellent opportunity to visit all the above grandstands and to take some hopefully great pictures.

The F1 Village is located behind the Pits Straight and Woodcote area and fan merchandise are on sale within this area, as well as some interesting displays from the tire manufacturers and other F1 related suppliers. It features pleasant grassed areas, with a variety of mobile food and drink units. The F1 Village is accessible from every grandstand.

Food and beverage With over 100 mobile catering units positioned around the circuit, a vast range of food and drink is on offer to the racegoers. Prices range from €4 for a burger, €7 for fish and chips, €9 for a pizza, €4 for a cold beer and €2.50 for bottled water.

Circuit radio Spectators can listen to live race commentary for the duration of the 2019 British Grand Prix in English, which can be very helpful to follow the race. Once the pit stop phase commences it sometimes becomes rather difficult to determine track positions of the various cars on different pit stop strategies. So make sure you take a small portable FM radio and earphones along in order to use this nice to have service.

Grand Prix Party Every year the circuit stages a Grand Prix party when thousands of fans stay after the chequered flag was waved, to savour the performance of great bands, in a specially constructed arena in the centre of the circuit. 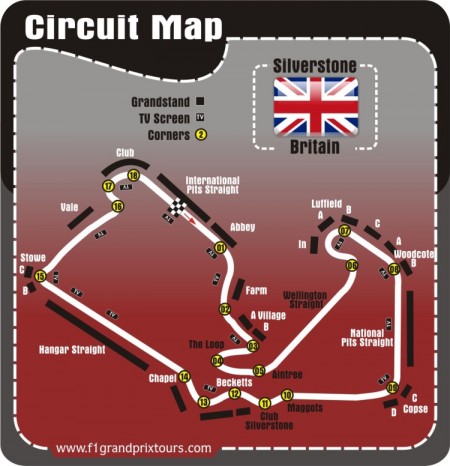